Welp, it's transfer week, so goodbye to Elder Lex my Austrian brother.  I'll get to stay here in Craiova but I'll get a new companion, Elder Mayans.  I think he's only a transfer or 2 ahead of me, so that'll be perfect.  The funny thing is, I asked for a companion who could help me with the language, but instead I got someone with only a little more experience than me.  Hopefully, this is a blessing in disguise.
This week was great.  We had the opportunity to finish listening to General Conference, which was absolutely inspiring, as always.  I also had the opportunity to do some area book work, which helped me with my language skills a lot, since I didn't have someone to fall back on if I didn't understand.  Also, we got a lot of potential investigators out of that work.  Sadly, no investigators yet.
One of our district goals was to visit a recent convert or less active member each week.  We tried to visit one of our less active members, and on the way, we met with one of our investigators who we hadn't been able to meet with for a while.  He explained why, and hopefully we'll be able to meet up with him again soon.  When we arrived at the less active member's apartment, no one was home.  We were somewhat discouraged as we returned home, but then the cleaning lady on the bottom floor stopped us and asked about why we were here.  We then had the opportunity to share a bit about the Gospel and even give her a Book of Mormon.  The Lord blesses us in ways that we never think of.
Also this week, we went up into a bloc for a meeting with the branch president, and we all got into the elevator, except one elder was too slow and was outside when the doors started closing.  So one of the elders inside put his arm out to catch the door before it closed, only this door didn't want to stop closing.  Once the elder realized this, he quickly pulled his arm out just as the doors would have crushed it.  Welcome to Romania.
We also got to go bloc-knocking this week, which was a good experience for me.  I haven't worked that hard in a couple weeks.  We went through 3 blocs and got to pass out 1 Book of Mormon, which was really good.  Most people wouldn't even say anything when they opened the door.  They would just see it was us and then close it and lock all 25 locks on their door.  So I guess people really do that.  I thought that was just a mythical missionary tale and that didn't literally happen, but it does.

October 21:
This week, I got my new companion, Elder Mayans.  He's really cool and I think we're going to work well together.  We've mostly been advertising for our English classes, which are coming up, so that's been keeping us busy.  We've met some really cool people through that and hopefully, they'll show up to our classes!  We're putting posters up throughout the city, putting ads in the newspaper and online, and handing out little cards to people.  We're trying really hard to get some good success from this, and hopefully it pays off.  I absolutely love teaching English classes, which is weird, since never before have I loved teaching at all, but it's really fun to talk to the students and make mistakes and learn together.  We're having a halloween activity this saturday and we have 3 of our previous english students coming, and they seemed really excited about it so hopefully it'll be a great success!

We went contacting in the park (2nd biggest urban park in europe, aww yiss) and decided to go a new way out to the road, and we stumbled upon this crazy hut thing in the middle of the woods!  It's super cool and just kind of out there in the middle of nowhere.  We also found this crazy communist sign which was really cool. 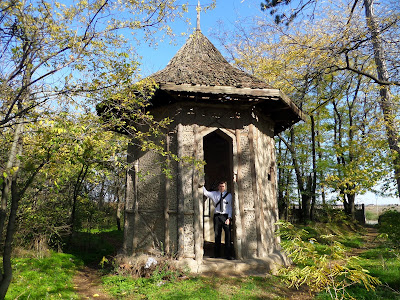 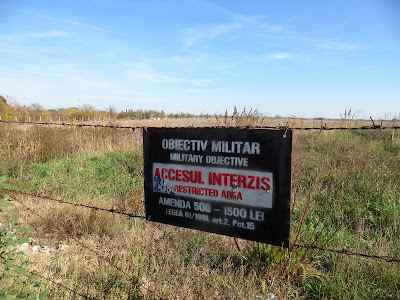 Posted by hollyharris at 9:50 AM No comments: