I talked to a schizophrenic the other day.  We went up to him and were like hey we're missionaries and we're here to help people come closer to christ. do you believe in Christ?  And he turns to "the guy next to him" (who wasn't there)  and he goes, "These guys look really nice with their white shirts and beautiful ties, but you know, strange things happen at places..... strange things happen at places........ strange things happen at places......."  So we just booked it outta there.  In hindsight, that may not have been the best way to have dealt with that, but there wasn't really much else we could do anyway.  another time, we were contacting in the park, and found one of eternal investigators there, named Olimpian.  He's a great guy and really loves the Church and is always finding things for the missionaries to do.  On this particular occasion, he had something he wanted to show us.  So we followed him as he hurried away, toward the edge of the park.  We walked past the zoo (yep, there's a zoo in the park, complete with lions, tigers, bears, a golden eagle, and a gladiator pit) and out to the cemetary.  We zigzagged through the maze of headstones and tall monuments (it kind of resembled the one we saw in Paris) until we reached one particular grave site that he wanted to show us.  He points to the headstone, which said Olimpian Bobos 1948 - ____, and says, "Intelegeti?"  He patted the ground.  "Olimpian va sta aici."  Meaning: Do you understand?  Olimpian will rest here.  He already had his own grave!  Although it was kind of weird for us, and we didn't know what to say back, we can commend him for his foresight.
Posted by hollyharris at 10:31 AM No comments:

This week was great, but really really hot. I got permission from President Hill to practice piano for 1 hour on days when it's bad proselyting time. In the afternoons it gets really hot, so there's no one outside. Also, since Sunday is the only day that most people have off of work, there is nobody outside at all. It's like a ghost town. We found out that watermelon is super delicious and super cheap here! It's .49 lei per kg, so like 15-20 cents. Also, the suc (soda) here is really good and really cheap as well. You can get 2 liters for 30 cents, and they have crazy flavors, like grapefruit and pear and elder-lemon. (That one is Elder Lex and I's favorite). I found out as well, that leu is the singular for lei, which is their money system. What's cool about that is that leu means "lion." So we pay for things in lions here. Another thing that is amazing here is the Nutella. Although I haven't had any real Nutella yet, they have good knock-off brands that are way cheaper. They have one that's called chocremo, which is a swirl of nutella and white chocolate. We eat that on our delicious italian-like bread that is 1 leu as well. Not to worry though, I've actually lost weight here from all the walking and sweating. Also, I've been teaching Elder Lex some gymnastics stuff, so we'll be in good shape, and maybe my suits will fit again. Also, I found out that Elder Lex is famous! If you ever happen to get your hands on the "Tithing and Fast Offerings" Church pamphlet in German, and you turn to the first page, you will see Elder lex and his family! Apparently, they knew the photographer that did the pictures for those pamphlets, so they got to be in one of them.

And in case you haven't seen this epic picture of Scott, I hope it makes your day: 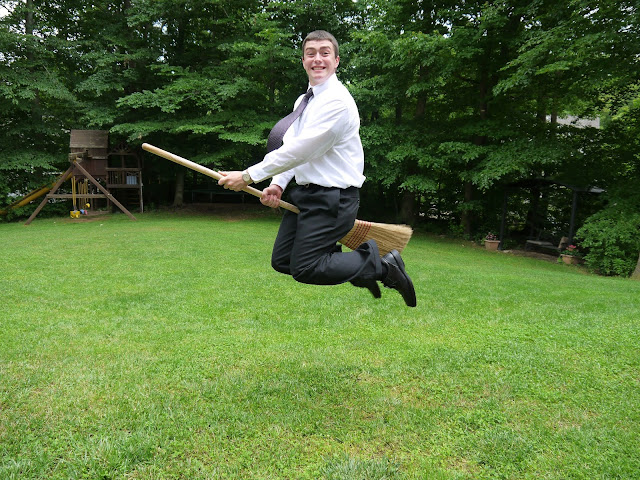 Posted by hollyharris at 6:33 PM No comments:

Here are Scott's e-mails from his first couple of weeks in Romania:

Hey! First P-day in Romania! So on our way here, our flight from JFK to Amsterdam was delayed 2 hours for noooo reason so we got to Amsterdam with 10 minutes until the plane left the gate.  When we got off the plane we asked one of the workers there which gate our flight was and it was all the way on the other side of the airport! So we took off running to get there on time and we got there with 5 minutes to spare! But it was the wrong gate.  We were so late that when we asked for the flight to Bucharest she thought it was the one that left 3 hours later.  So we looked at the board thing and found our real gate and ran to that one.  Luckily, we made it with -1 minutes to spare. We were the last ones on the plane, but we made it safely there at least, and all but 2 of our bags (for the 10 people that traveled in our group) made it there on time.  We got picked up by President and Sora Hill and they drove us back to the mission office.  We got interviewed by President Hill, who is a really cool guy.  We mostly just talked about the piano the whole time and I found out that his favorite composer is also Prokofiev, what a coincidence.  We then met up with some other missionaries and went park contacting.  We split off into companionships and my companion had only been out in the field for 6 weeks, so neither of us knew what we were talking about.  Despite our handicaps, we placed 2 BOMs and got 2 phone numbers.  For dinner, we had shoarma, which is this really cool wrap-sandwich thing with chicken and french fries and onion and pickles and some crazy sauce that I dont even know what it was. It was really good though.

The next day we went to the mission home and ate Hungarian Gulash, also delicious.  We found out who our trainers are and mine is really cool.  He's from Austria, so he had to learn 2 foreign languages to go on a mission.  Ans I thought I had it bad.  We went to the Gara (train station) and got on our train to Craiova, our first area.  We ate gogosi (gogoshe) on the train, which are basically donuts, but less sweet and more fried.  Craiova is in southwest Romania, and here it's all fields.  Super flat.  Our apartment is really cool, very European.  We get king-sized beds, so thats a plus.
We met this old guy with only 1 leg who sits on the corner of the street our bloc is on.  According to missionary lore in Craiova, he is one of the 3 Nephites.  He just sits there and talks to people, and never begs for money.  He loves seeing us and always wants to shake our hand and talk to us.  We have to walk everywhere in this mission because the traffic is so bad.  I havent seen one stop sign here at all.  There is essentially no traffic control, so everything is in chaos.  However, it is organized chaos.  Everybody knows when to go and when to stop, but it looks incredibly disorganized and dangerous.  Since ther are no stop signs or stop lights, in order to cross the street you just have to start crossing.  Even if there is a car coming, you just have to step onto the street and cross or else nothing will happen.  If you see a car a little ways off and you start crossing, they will slow down and stop.  You have to put your faith into action before anything will happen.  If you just stand there waiting for someone to let you cross, youll be waiting for a long time.
On Saturday, we went to Severin, which is a town to the northwest of Craiova, right on the Danube.  We visited a member there who hasn't been to church in 20 years, because there is no branch or group or a single missionary in Severin.  This guy was so excited to meet with us and showed us around his city and fed us lunch and talked and talked and talked.  Romanians absolutely LOVE to talk.  We ate this quiche-like thing, which was really good.  He gave us each signed copies of this book that he wrote-in Romanian.  I'm still getting used to everything being in Romanian, and not English.  On the way to Severin, we saw a gypsy buggy, which is literally just a big wagon pulled by a horse.  I didn't know that  ANYBODY used horses and buggies anymore.
Everything in Romania is crazay cheap. We buy bread all the time, and it's like that Italian bread that Dad loves, and it's only 1 ron (~30 cents)!  At church on Sunday, there were 11 people there, and if that seems like a lot, just wait.  4 of us were missionaries, 3 were the branch president, his wife, and his little girl from Constanta, so they were just visiting, and 1 was the branch president, who is an American, 1 was an investigator, and 2 were real, actual, bonafide, Romanian members of the Craiova branch.  These members were baptized 18 years ago when the mission first opened, so they are kind of the pioneer members in Romania.
Well, Romania is really cool.  I've heard that people call it "the Mexico of Europe," and I can see why in Bucharest, but here in Craiova, it's pretty European I think.  There are a bunch of old buildings and statues and whatnot.  I can see all the influences it has had though, like from the Slavs and the Roma and the Turks and especially the Communists.  Everywhere you look you can see a communist bloc.  Romania is a cool country and I am excited to serve here.
~~~~~~~~~~~~~~~~~~~~~~~~~~~~
Okay, so this week, I learned that "barfa" means "gossip" (I thought dad would liek that one) and last Tuesday, we went to Bucharest for zone training, and apparently its a tradition, when we go to Bucharest, to go to this one restaurant, which my companion told me was really good.  Well, we went there, and it was awesome.  I'll send some pictures of it.  Basically it was this really really old building which was super cool and all the walls were painted, meaning that they had actual paintings on them, and we had a four course meal, which was delicious, and it only cost 22.4 lei! (~$7-8).  I figured dad would like that as well. My companion teaches me a lot of stuff, and he really likes cooking.  The other day, we ate gnocchis, which I had never heard of before, they're like these little balls of potato (?) dough that you eat with red sauce.  They were really good though.  Also, apparently, Elder Lex went to jail here in Romania for proselyting in the Centru (it was in another city though), so we don't do that, so you don't have to worry about me going to jail. 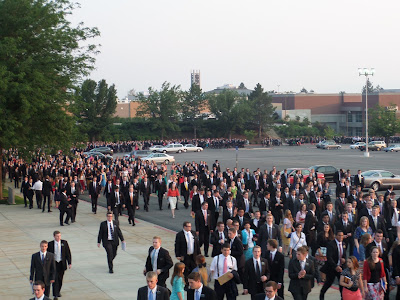 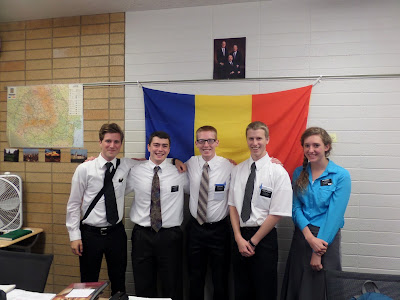 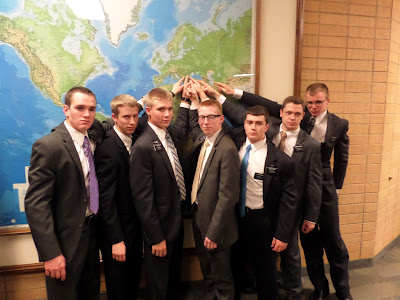 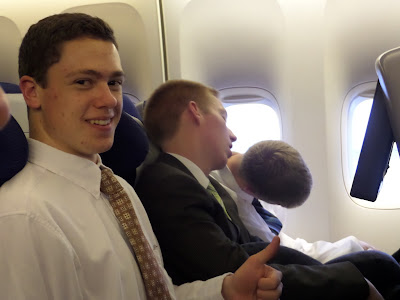 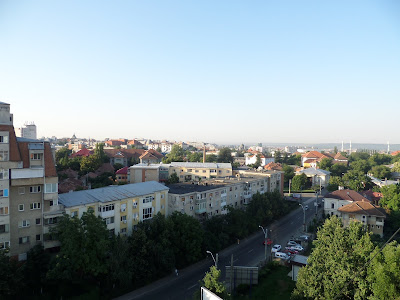 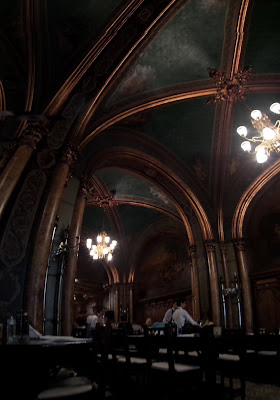 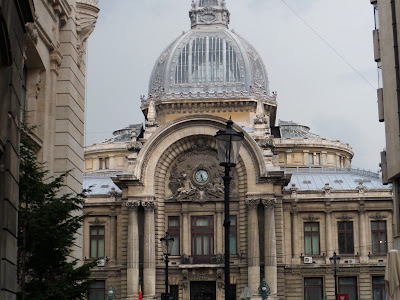 Posted by hollyharris at 5:39 PM No comments: